Earlier this week, I posted a few photos to Instagram which highlighted two variations of a bodyweight tricep extension. You can see below how I perform the exercise with manila ropes and sledgehammers. The ropes add a grip challenge to the movement while the sledgehammers provide instability. These two variations are much more difficult than the more commonly seen bar and bench versions. Even a suspension trainer proves less challenging than the ropes and sledgehammers for this particular exercise. 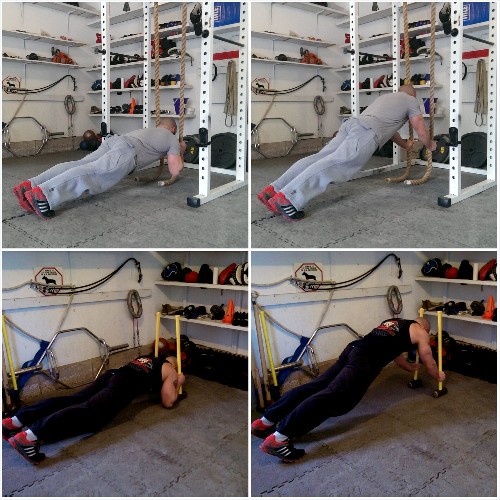 One reason that I wanted to share these images was to continue a theme that I highlighted in a recent entry (see here). As mentioned previously, the best forms of variety are often subtle. For instance, performing this exercise from sledgehammers as opposed to a bench may look similar but the challenge is entirely different. When first attempting this exercise from hammers, it is not uncommon for the body to shake uncontrollably as it struggles to maintain stability. And while the triceps are certainly targeted, there is much more to the movement. For example, many are surprised at the secondary core challenge. I have seen several strong athletes humbled by what appears to be a relatively basic bodyweight movement.

Using myself as an example, I have performed bodyweight tricep extensions for many years now. I first demonstrated the exercise online over 10 years ago. It was a favorite of mine then and it remains a favorite now. There are variations to this movement that I will never outgrow. Such variations continue to prove both challenging and beneficial.

Yet despite what I consider a tremendous exercise, it has never captured much attention. The rope variation has actually been included within a few of my recent compilations. You can see a brief example at the 3:23 mark here. Since creating that video, I’ve received comments about almost every exercise included except the tricep extensions.

It is one of those movements that isn’t exciting to see and whose difficulty is impossible to comprehend without trying. The reality however is that this exercise remains one of the more challenging movements within my arsenal. I have had days where I felt like a beast after doing dips with 225 pounds attached, only to be destroyed by two sledgehammers in the corner a few minutes later.

The take home lesson therefore is simple. Exercise quality has nothing to do with flash and visual appeal. As discussed recently, many of the best movements appear quite basic. Contrary to what social media may suggest, training effectiveness is not based on how many onlookers you attract. I will take substance over flash any day.

If you are looking for a strength movement that is easy to learn yet difficult to perform, this exercise is certainly worthy of consideration. It is always nice to have effective exercises that can be performed almost anywhere with minimal equipment. As a trainer, it is also nice to have exercises that are devoid of steep learning curves. There are no elaborate skills that must be mastered before attempting this movement.

And for the beginners in the crowd, the exercise can be made much more feasible by altering the starting point. Simply start from a higher position on the rope (or a suspension trainer). It may take some experimenting initially, but you should be able to find an angle where you can perform quality repetitions. As your strength increases, you can gradually lower your starting position. In time, you can progress by adding a weighted vest and/or working with a more difficult variation such as the sledgehammers.

“Many an opportunity is lost because a man is out looking for four-leaf clovers.”