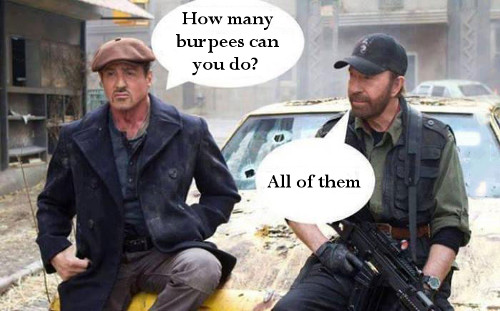 Below is a story of a woman who performed 100 burpees each day for an entire year. The hard work performed by this 40 year old mother is not only inspiring, but also led to an impressive transformation. You can see the before and after pictures within the video that follows. There is a side by side comparison at approximately the 4:55 mark.

I first shared this story on Facebook after seeing it on my news feed. Upon sharing the video, I was surprised to hear from both of the individuals seen within (see here). I was honored to learn that they are past customers of mine who were influenced by material.

More importantly however, I was happy to see yet another low-tech exercise routine that produced amazing results. The exercises performed by Nikki could be done almost anywhere. Her transformation is the direct result of hard work and consistency. She didn’t need anything fancy to completely overhaul her life.

As for the specifics of her routine, here is what Nikki had to say about performing the burpees:

“Most of the time they were done in addition to my workout. At the beginning I did 10 sets of 10. Sometimes 5 at a time with only a couple of breaths.”

Nikki also stated that she would occasionally test herself with 100 burpees for time. Her best performance was 6 minutes and 30 seconds. That’s a solid time for anyone. Performing 100 burpees continuously is no small task.

Nikki also performed burpees in conjunction with other exercises and drills. She was quite creative in varying her work throughout the year. Although she may have been performing the same exercise, she was able to prevent boredom through her varied approach.

One routine of hers included the following:

Another routine included a weighted vest:

Clearly, the samples above are just a few of the many routines that Nikki performed. Her creative approach to performing burpees minimized the chance of staleness and mental fatigue. Yet, despite her emphasis on burpees, my eyes look beyond the fact that she performed the same exercise each day. No single movement is as important as consistency and commitment.

While burpees were an important part of Nikki’s routine, the fact that she was accountable for a certain amount of work each day is what ultimately triggered her success. Nikki woke up each day knowing that there was work to be done and she held herself accountable for it. And if she missed a session, she would make up for it the next day. That alone is incentive to get the work done now, rather than procrastinating. Therefore, Nikki wasn’t just consistent, she was focused on the present. She didn’t worry about tomorrow when there was still work to be done today.

Unfortunately, that type of commitment is rarely highlighted by the fitness industry. Many of the big players in the game ignore those intangibles that cannot be packaged and sold. It will always be more lucrative to sell equipment, memberships, and supplements.

If you browse throughout this blog’s history, you will see countless weight loss stories that share little in common. For example, there was a man who lost over 100 pounds through running alone. Another man lost over 200 pounds by riding a bike. Others have lost weight through calisthenics and weight lifting. Each story highlights an entirely different approach to training.

What these stories share however is that each individual chose to remain consistent. No longer were there periods of inactivity. Finally, each person committed themselves to waking up each day ready and willing to work. The cumulative effect of such hard work and consistency is what ultimately leads to success. What you choose to do is of lesser importance than your willingness to keep at whatever you do as the days and weeks amass.

In summary, I am not sharing this story to suggest that everyone should perform burpees each day. Instead, look past the specifics and focus on what is truly important. Nikki is a tremendous example of hard work and consistency. Her willingness to repeatedly hold herself accountable is something that we can all benefit from in some way.

Hopefully her example will inspire others to make similar changes if they have failed in previous attempts.