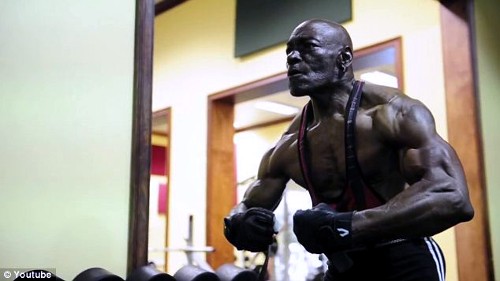 Below is a video of a 70 year old bodybuilder with a physique that would be impressive on a man half his age. The clip is well worth a look, not only to see how incredible this man performs for his age, but also to hear his thoughts about life and training.

There is so much to like about this man’s philosophy and achievements. For starters, he didn’t begin lifting until age 44. Meanwhile, I regularly receive emails from men in their 30s who are already complaining about old age. Sonny hadn’t even started at that point in his life. Even at age 44, he walked into the gym without knowing anything about lifting.

And to the younger readers of the site who may not know, we didn’t have the internet 27 years ago. Sonny couldn’t hop online to read the latest training research. It is safe to say that he learned his lessons in the gym. He paid his dues through hard and consistent work and the results are obvious.

It is also nice to see a man his age who trains as a bodybuilder. I’m sure we’ve all seen gurus today who make a point to regularly bash bodybuilding and anything related to it. I can only imagine the comments that they would make if the video above was of a 30 year old man. I’m sure they would be nitpicking his exercise selection and use of a machines.

Now take a moment to think about these modern age gurus. How many of them will perform at Sonny’s level when they reach age 70? Call it a hunch, but I’m guessing the number will be slim. That alone speaks volumes.

And I don’t say this to suggest that everyone should train as a bodybuilder. Personally, I have no interest in bodybuilding. I’m not ignorant enough to believe that there is only one correct way to train however. As I’ve said before, almost anything works if the individual is willing to work and is consistent with his efforts.

Think back to a recent entry that I shared about older athletes who perform bodyweight exercise (see here). From a training standpoint, these men have very little in common with Sonny. The common link is that Sonny and these men all perform at a level that is light years ahead of their peers.

While fitness gurus in today’s era battle it out over who is right and who is wrong, these men prove that there are many ways to skin a cat. There is no single, best course of action that all must follow. It is possible to become stronger and better conditioned with countless approaches. Often times the deciding factor is not the routine that is followed but rather how the individual approaches the routine. How much effort is he willing to give?

I may sound like a broken record, but it is worth repeating. How you do what you do matters more than what you do. Countless real world examples validate this simple, yet often overlooked fact. Don’t get lost in paralysis by analysis. Find something that you enjoy and pursue it with relentless passion. The results will follow.

“All the so-called “secrets of success” will not work unless you do.”