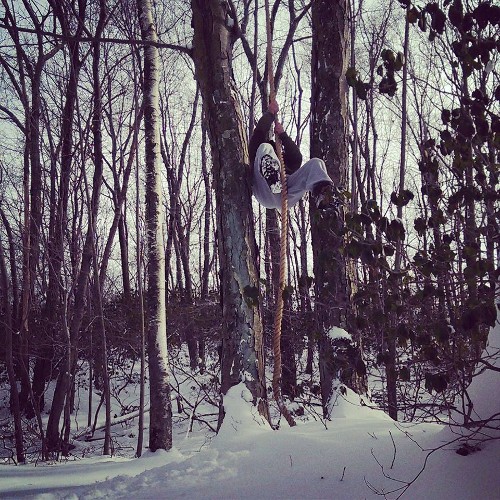 In recent weeks, I have shared many stories about training outside in the winter. Whether on this blog or social media sites like Facebook, I’ve discussed several options that exist regardless of the weather. As for the motive behind these posts, there is no hidden agenda. I don’t sell winter clothes and don’t own stock from any winter gear suppliers. My goal is to simply get people moving and eliminate the excuses that have been used before.

I wonder if the negative comments come from fitness pros who fear people training alone without paying for their services. I can’t understand who else would feel so strongly against training outside. Or are there really that many haters with nothing else to do? Regardless of the answer, I won’t lose sleep thinking about it.

Rather than succumb to the haters, I’d rather share another example of outdoor training in the snow. The video below comes from the arctic lands of Greenland. What you’ll see throughout is a man who does not allow the harsh elements to interfere with his training. He doesn’t make excuses about the snow, wind, and freezing temperatures. Instead, he continues to follow his passion and perform a variety of calisthenics.

The bulk of his training could be performed almost anywhere. The world is certainly his gym. He is quite creative in terms of finding areas to train. For example, look where he performs pull-ups at the 2:35 mark. No one told him that was a pull-up bar. He used his imagination and created an opportunity.

Much can be said of that simple example. Many people today wish to be spoon fed answers and routines. The ability to think outside the box and remain creative has become a rarity. So many adults seem to have lost the creativity that they possessed as children. If they can’t copy what is written exactly, they become stuck in a rut and often opt to do nothing. I hear from these people all the time and always encourage them to stop trying to copy me or anyone. For example, if I discuss hill sprints and you don’t have a hill to sprint, there is no need to panic. You can still figure something out. Running on flat ground would certainly be an option.

I don’t write about exercises or routines in hopes of creating an army of followers. Instead, I am providing ideas in hopes of getting you to think for yourself. There is always something that can be done. Whenever I’m outside, I look for opportunities to move. I’ve exercised outside in different states and countries and I always find something to do.

I may be in my late 30s, but when it comes to training outside, I try to think like a kid. When I was a child, we went outside and figured out things to do. We could make a game out of anything or nothing. My kids are the same way. I don’t need to give them ideas about what to do. Once they are outside, they’ll either find something or make something up. And it is that creativity that we should all cherish throughout life. It doesn’t need to expire simply because we’ve grown older.

In summary, you certainly don’t need to train outside, but the opportunity is often available. And whether inside or outside, I encourage you to remain creative. Exercise does not need to be a boring, monotonous task. I guarantee that the man who is exercising in Greenland enjoys what he is doing. If he didn’t, he wouldn’t be out there in the freezing temps. He keeps his works fun, varied, and creative. We can all learn and borrow from his example. There is always something that can be done regardless of what you have and where you are.

“There aren’t nearly enough crutches in the world for all the lame excuses.” – Marcus Stroup