Earlier today I posted the following picture to Facebook. 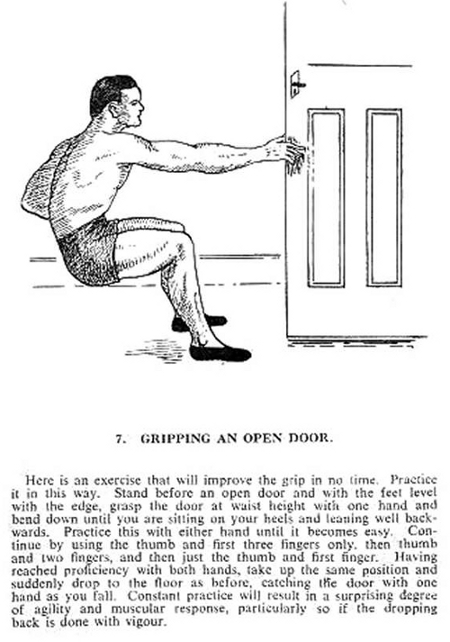 I wasn’t expecting much of a response as I’ve demonstrated the exercise before. Apparently there are new readers to the site however as the image garnered plenty of attention.

For starters, many asked about its origin. The image comes from one of Edward Aston’s old books. You can view the book in its entirety at the link below.

How To Develop A Powerful Grip – By Edward Aston

Edward Aston was a legendary strongman who was born in 1884. He possessed incredibly strong hands and performed many impressive grip feats. For example, at only 170 pounds, he deadlifted 496 pounds on a 2 1/4″ bar using an overhand grip.

As for the exercise itself, it is intended to develop pinch grip strength. As for difficulty, I’ve had many athletes humbled on their first attempt. As for door safety, I’ve performed this exercise and similar variations for many years and never had even the slightest of problems.

For those who wish to make the exercise more difficult, you can alter the position of the feet and the distribution of your bodyweight. You could even hold a dumbbell in the non-working hand and/or attempt to perform one-arm pinch grip body rows.

Initially, most athletes won’t need to make the exercise more difficult however. Pinch grip strength is often underdeveloped. One reason is because the thumbs rarely receive direct work. If you wish to target the thumbs separately, one of my favorite options is the finger exerciser seen in the tutorial below. 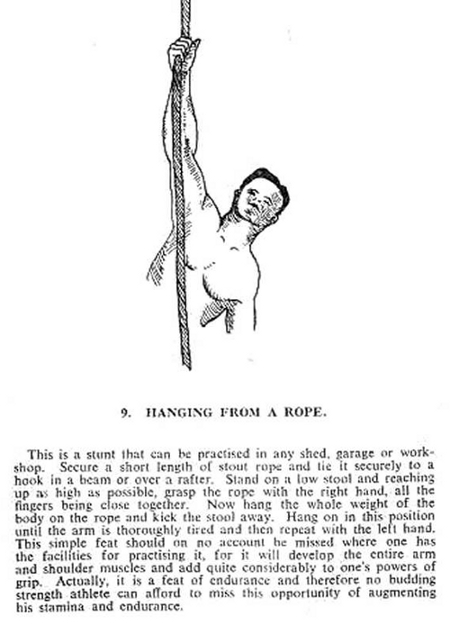 A similar variation can also be performed with a towel. A beastly demonstration can be seen below.

As you can see, some of the best grip training options are relatively low-tech. The simplistic nature does not diminish the difficulty however. Exercises such as those seen above can be extremely challenging. Be sure to look through Edward Aston’s book for additional ideas.

“A chain is no stronger than its weakest link, and life is after all a chain.” – William James