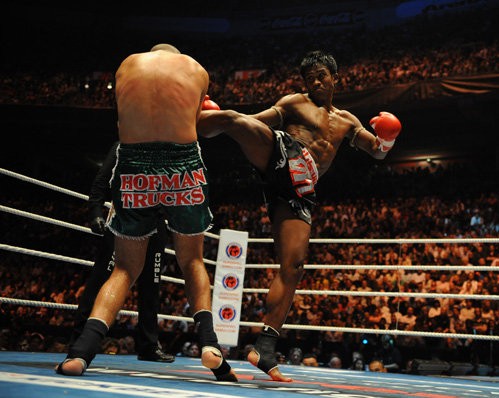 Following a recent post about my training origins, I received several messages from readers of the site who have thrived in similar environments. I’ve also received video links of other fighters who continue to excel in minimalistic, low-tech gyms. One name that has come up repeatedly is Buakaw Banchamek (more commonly known as Buakaw Por Pramuk).

Buakaw has been a dominant fighter for many years. To no surprise, he relies heavily on the sport itself for the bulk of his training. Such an approach has been successful for countless fighters from various disciplines throughout history. One of my favorite examples of this approach comes from the legendary Jack Dempsey. Like Buakaw, Dempsey focused heavily on his sport which was boxing. Buakaw follows a similar approach with an emphasis on bag work, pad work, and sparring. He’s also been extremely active with well over 200 fights throughout his career.

A fifteen minute video of Buakaw’s training can be seen below.

Another brief clip can be found next.

As evident in both examples, Buakaw works hard yet does not require anything fancy in terms of equipment or facility. Much of his work could be performed almost anywhere. Clearly, it is not where he trains that determines his success. His success is instead based on years of hard and consistent work with the basics.

And as stated many times before, I do not share these stories with hopes that all readers of the site will strive to become world champion fighters. More importantly, it is useful to see how champion fighters can achieve greatness with a relatively basic approach to training. As demonstrated before, combat sports offer plenty in return even for those who have no interest in fighting. You don’t need to be a fighter to benefit from such work.

“Nature is pleased with simplicity. And nature is no dummy.” – Isaac Newton