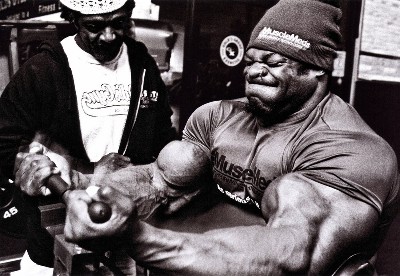 The video below is an hour long documentary about professional bodybuilder Kai Greene. Those familiar with this blog may recall seeing him in a previous entry. When I first heard Kai speak in 2010, I immediately connected with his thoughts regarding rage as it pertains to training.

Those who enjoyed the first video will likely enjoy this full documentary as well. I certainly enjoyed listening to him speak, and I say that as someone with absolutely no interest in bodybuilding.

I’m a big believer in the idea that we can often learn from those who excel in their given profession. I don’t need to be a bodybuilder to listen and learn from someone like Kai. We clearly do things differently as our goals are unique, but I’m still open to see how he prepares himself physically and mentally.

I often see bodybuilders knocked for steroid use, but the critics who make such comments forget that there athletes in all sports who are guilty of drug use. I’m not here to debate whether bodybuilders use drugs, but rather to openly listen to a man who clearly stands outs from his peers. Kai Greene overcame an early life of poverty to become one of the most dominant bodybuilders in the world. Success didn’t fall into his lap. He’s worked extremely hard and intelligently to get where he is.

When someone in his position speaks, it is usually a good idea to listen.

“Absorb what is useful, Discard what is not, Add what is uniquely your own.” – Bruce Lee