The video below highlights a young girl’s inspiring story of weight loss after starting her life as an obese child.

Breanna’s transformation is nothing short of incredible. The before and after pictures are shocking particularly when you consider her young age. 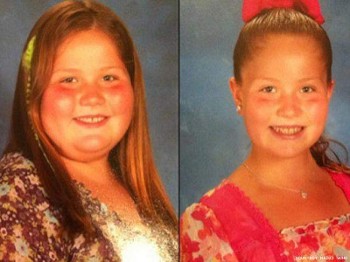 Breanna weighed 100 pounds in kindergarten. Her weight soared to over 180 pounds by age 9. Classmates teased her regularly. Her childhood had become what every parent dreads for their children.

Fortunately, Breanna’s parents decided it was time to change. They modified her diet and started her on a regular exercise program. In the time since, she has lost over 60 pounds. Classmates no longer tease her. Breanna is able to play sports and enjoy an active life the way all youngsters should.

There are several positives that we can take from her story. Perhaps most importantly, it is great to see parents step up to the plate to elicit the change that is necessary for their children. Breanna’s story also delivers a valuable reminder that almost any course of action can be successful if the individual is diligent and consistent.

Breanna’s parents did not follow any revolutionary exercise or diet plans. Their approach was quite simple. They cut back on her caloric intake and increased her activity. In fact, after hearing about her diet, my initial reaction was that I would probably do things differently. Fortunately, my opinion regarding her diet means nothing. She has been successful with her approach and that’s what matters the most.

As for her success with a simplistic approach, it is no surprise to me. Over the years, I have chronicled numerous weight loss stories that utilized similar methods. One of the more popular examples can be seen below:

Yet another popular example comes from a man who took to bike riding to lose over 200 pounds.

Large Fella on a Bike

I could go on and on with similar stories. Within each, you’ll notice success with what could be described as an overly simplistic approach. The success therefore doesn’t stem from the specifics of the exercise regimen, but more from the effort, sacrifice, and consistency put forth by the individual. It is these individual variables that spark the true change.

Similar points were discussed in another recent entry.

The Decision To Change

Once you are committed and determined to change, you can succeed with almost anything. Don’t get lost in paralysis by analysis. Recognize that you won’t have all of the answers on day one. You will learn as you go. It is all part of the process, whether your goals are weight loss, muscle gain, or anything in between.

“Action is the foundational key to all success.” – Pablo Picasso