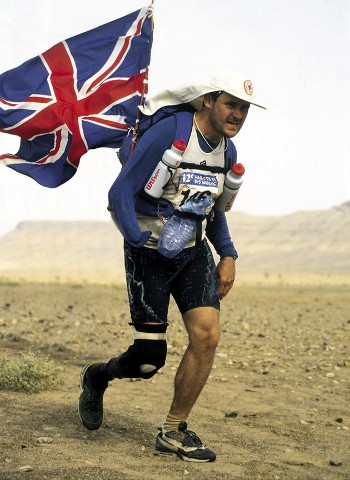 If you aren’t familiar with Badwater, take a look at the brutal description below (courtesy of Wikipedia):

The Badwater Ultramarathon describes itself as “the world’s toughest foot race”. It is a 135-mile (217 km) course starting at 282 feet (86 m)[1] below sea level in the Badwater Basin, in California’s Death Valley, and ending at an elevation of 8360 feet (2548 m) at Whitney Portal, the trailhead to Mount Whitney. It takes place annually in mid-July, when the weather conditions are most extreme and temperatures over 120°F (49°C), even in the shade, are not uncommon. Consequently, very few people, even among ultramarathoners, are capable of finishing this grueling race.

For a 50 year old, amputee to complete such a grueling challenge is beyond inspiring.

For more information about Chris Moon and how he lives his life, take a look at the brief video below. He’s done everything but give up on life following his near death experience. We can all learn and benefit from his example.