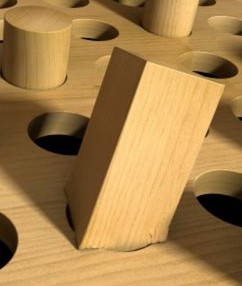 The most successful people in the world think for themselves. They aren’t guided by secret puppet masters. Successful people get their hands dirty, take chances, experiment with new ideas and continually strive to improve. They view best as something that can always be made better. Best therefore remains a moving target.

From a business standpoint, Bill Gates offers a prime example. As I’ve said before, he didn’t take a class on how to become Bill Gates. Yes, he surely had mentors along the way, but he had to figure things out for himself. There wasn’t a book or course that outlined his future business model. If such a book had existed, someone would have already used it.

Unfortunately, I’m not here to tell you how to become the next Bill Gates. I wish I knew. My point with this entry is to instead encourage you to think for yourself. You will only go so far if someone else thinks for you. The time will come when you must find things out for yourself.

A day doesn’t pass without me receiving multiple emails from people requesting detailed, step by step programs. When I see these emails, I often think back to Dave Tate’s book Under The Bar. Tate had some excellent things to say regarding program creation.

“A program alone will not yield results. It’s the modifications that are made along the way that lead to the success of the program…”

Tate then continued with the following,

Now there are many coaches and trainers out there who will proclaim they have this ability and that their programs will work for anyone. I am here to tell you they are dead wrong! It is just not possible for one to see into the future. Training is a process that has to be taken day to day. Yes, you need to have a basic plan to work from, but there are so many variables that can change at different rates that you must be willing to adapt your plan accordingly… A prescribed training plan is a good idea, but is only that, an idea. The rest has to be pieced together as the session and workouts progress… You will make many changes to your plan along the way.

I encourage you to follow Tate’s advice. It is impossible to find a generic program that was tailored specifically to your needs. Trainers don’t have crystal balls and they don’t develop programs specific to your needs when creating sample plans. A sample plan is just that. It’s a sample. It isn’t etched in stone. Sample plans are not created specifically for anyone.

I often compare sample plans to outlines or summaries of a particular style or philosophy. When you see a sample routine, try to look past the specifics (at least momentarily) and instead focus on the philosophy and principles that were used to develop the routine. Yes, you can experiment with different programs, but the goal should always be to customize the material to coincide with your specific interests and needs.

Think about it like this… If an author sells 100 books to 100 unique readers, how can the single program contained within that book be ideal for all 100 readers? On a smaller scale, if you and I have different goals, why would you and I follow the exact routine? Despite what some may say, there isn’t a single routine that will cover the unique needs of entirely unique athletes.

And even if or when you come across a program that is ideal for you, it will not be the best thing for you forever. The best program today will rarely be the best program this time next year (perhaps even next month). The training process must evolve and adapt over time. This doesn’t mean that you’ll need to knock everything down and start from scratch, but subtle additions and modifications can and should be made over time.

I’ve been in the gym for most of my life. Yet even with all of my experience, there are times when I don’t even know myself. I’ll have a plan in mind for an upcoming workout, but more often than not I’ll make modifications once I get into the gym. I never commit to something that is written on paper, even when I’m the one who wrote it.

Sunday night, I had a tentative plan for what I would do Monday. On Monday morning I got into the gym and felt like a beast. I had a lot more in me than I expected the night before (when creating the workout). Should I have stopped simply because of something I had written down the night before? Of course not…

There are days when you just need to go for it. Forget about what’s written down on paper. If I’m feeling particularly strong, I’m not going to slow myself down or stop simply because the pen says so. I’ve hit some of my best numbers on days when I was not supposed to. I felt strong and decided at that given moment that I was going to go for it.

There will be other days when I may get a little too ambitious on paper. I get into the workout and realize that it just isn’t the day. The greatest athletes in the world have off days. Some days, the iron is flying. Other days, you just don’t have it. During these times, you need to be flexible and make changes if necessary. This isn’t to say that you should give up on the session, but rather that you are willing to adapt based on your capabilities and mindset for that given day.

If you are reading this entry, you are a human being, unless of course there are aliens that I don’t know about. As people, we all have good days and bad days. Yes, we all attempt to control those circumstances that lead to the good and bad days, but life is often unpredictable. I couldn’t have predicted that my daughter would be in pain last night from teething. When I went to bed, I didn’t realize that I’d be up half the night. Life often throws curve balls when we least expect it. Therefore, we need to be on our toes at all times, willing and ready to adapt when necessary.

Yes, it’s nice to have a tentative plan in place, but even the best plan in the world will require modifications at some point. No one knows you better than you. Training isn’t as complicated a process as many would like you believe. Rather than asking for a fish, you’ll be better off learning how to fish. You can then cut the strings off the puppet master and chart your own future. This isn’t to say that you should stop trying to learn. Instead, I’m simply reminding you that much of the learning process involves you getting your hands dirty and finding out firsthand what works best for you.