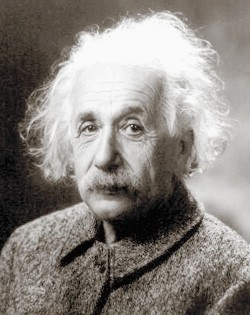 This entry is a follow up to Part I. I will address some of the questions that arose following the original piece.

To begin, my advice to think for yourself is not a suggestion to reinvent the wheel. Strength isn’t new. The wheel has already been invented.

Clearly, the novice needs direction. He isn’t expected to arrive at the gym on his first day with all of the answers. Even Einstein had to gradually acquire his knowledge. Thinking for yourself doesn’t mean spitting in the face of common logic. I’m certainly not knocking traditional sources of knowledge (ex. reading books, working with different routines, questioning more experienced athletes, etc.).

Instead, I simply remind you that you too can become a valuable source of knowledge. Often times, we learn by doing. There is only so much that you can take away from a book that was written by someone else. Human beings are not automated robots. We must all recognize and appreciate the uniqueness of each individual.

Unfortunately, many from this industry would like you to believe that their word is gospel. It is their way or the highway. These same people often try to confuse otherwise simple topics in an attempt to create dependencies. There is nothing more ignorant than suggesting that there is a single “way” to train. Great athletes have been developed with countless methods and protocols. There is no single way and there never will be.

As I stated before in a past entry:

The Internet has changed the fitness industry. Never before has getting in shape been made out to be so complex. I’m only in my 30’s, but even we didn’t have the Internet when I was in high school. I didn’t learn of the Internet until my freshman year in college. Back in the day, no one assumed that a degree in rocket science was required to build strength in the gym. I know groups of guys who may have had one brain between the entire group, yet were monsters in the gym. Not many athletes and gym rats were in contention for valedictorian. I’d be willing to bet that our high school valedictorian didn’t know the difference between a pull-up and a chin-up. Fitness wasn’t his gig. Exercise wasn’t thought of as one of the lucrative fields to pursue. There were still loads of strong and amazing athletes however. The difference was that no one was trying to confuse them with irrelevant bullsh*t. Athletes went to the gym and busted their ass. The results followed. That’s it. Nothing fancy.

Furthermore, thinking for yourself often means nothing more than reacting to the moment. For example, if a cookie cutter routines calls for 4 sets, you won’t be penalized or fined if you feel the need to go for a 5th or 6th set. You don’t need to be a 10 year veteran to have a good day. There is nothing wrong with raising the bar and trying to separate yourself from the majority.

As a kid, I would come home from baseball practice and pitch into an empty garbage can. I had days when I pitched a full game by myself. I called balls and strikes as I pitched into the empty barrel. On other days, I would throw the ball against a backstop and practice fielding ground balls. I practiced into evening, long after the sun went down. I wasn’t an experienced (elite) athlete. I was a young kid who wanted to be better than everyone else. If the team practiced for two hours, I wanted to practice for four. I never wanted to be like everyone else. I wanted to be better.

Twenty years later, I am still trying to improve. Despite all of the books and journals that I’ve read, there were certain things that I needed to find out on my own. The answers (for me) weren’t written in a book. I had to get in the gym, experiment with different methods and then come to my own conclusions. I’ve also learned that what works for me may not always work for one of my athletes. I don’t force my athletes to follow my exact lead. I recognize the uniqueness of the individual and cater their plans accordingly.

There isn’t a single book of answers that will apply exactly to all individuals. As a novice, you’ll gain strength by looking at a barbell. Almost anything will work. The time will come however when you begin to plateau. Yes, you’ll need to seek out new sources of knowledge (ex. within a book), but you’ll also need to learn things on your own.

And while this may be commonsense to some, there are still plenty who overlook this seemingly obvious truth. Many have been misled to believe that they cannot think on their own. They’ve been fooled by those puppet masters who do everything in their power to create false dependencies.

Even athletes with similar goals may need entirely different routines. For example, suppose John and Joe both wish to improve their bench press. If John’s weakness is the lower half of the bench, but Joe struggles with his lockout, each man has unique needs. They will need to travel different roads to improve their lifts. Each is plagued by a unique bottleneck, therefore each requires unique attention.

Many of the greats have figured things out for themselves. A perfect example of this concept can be seen within the second video from this past entry. Listen how Kroc discusses his use of heavy rows. Through trial and error, he found something that worked for him.

There will never be a single protocol or method that reigns supreme for all athletes. And even if such a program did exist, it would only last for a split second before someone then tried to make it better. Dominant athletes don’t want to be like everyone else. They always want to take what is good and then make it better. That’s the difference between the ordinary and extraordinary.