New research from the American Heart Association suggests that obese children as young as ten have arteries similar to that of a 45-year-old adult.

Fat kids founds to have arteries of 45-year-olds

As stated within the link above,

No one knows how thick a 10-year-old’s artery should be, since they’re not regularly checked for signs of heart disease, so researchers used tables for 45-year-olds, who often do get such exams. The kids’ “vascular age” was about 30 years older than their actual age, she found.”

The article goes on to suggest that 1/3 of American children are overweight and 1/5 are obese. It then states how the American Academy of Pediatrics has recommended cholesterol-lowering drugs for kids.

The fact that drugs are recommended as a solution isn’t a surprise, but that doesn’t make it any less pathetic. Do we really need to give our kids drugs to solve their weight problems? How about telling the parents to stop buying the junk that is causing the problem? I don’t know any 8-year-olds who do their own grocery shopping. When I was eight, I was outside playing until the sun went down. We rode bikes, played basketball, football, baseball, etc. I cannot remember any kids that were my age in the neighborhood who were obese.

How about we prescribe some commonsense to the parents, rather than feeding drugs to their kids? Is that too much to ask?

I’ve seen parents smirk and chuckle to themselves when they see my son eating fresh vegatables or fruit. We were at an aquarium a few weeks ago and we brought sliced veggies and apples to eat as snacks. It was as if we were the odd folks since we weren’t buying the overpriced fried food that was available for purchase.

Since when did health become such a rarity? Since when did eating a fresh piece of fruit make you the odd man out? Since when was it rare to get up off your ass and play outside with your children? Is that really too much to ask of a parent? If you can drive to the pharmacy to pick up a prescription, why not use that time to go outside and throw the ball with your kid? Guess what, they just might enjoy it, and you just might have some QUALITY time with your kids. Doesn’t that mean anything to anyone anymore? Shouldn’t parents care about the health of their children?

My son will pick playing outside or tagging along at the gym any day over sitting in front of the television. We don’t force anything on him. He is more eager to go to the gym than I am on most days! He would stay all day if he could. Kids learn from and imitate their parents. Parents need to lead from the front. 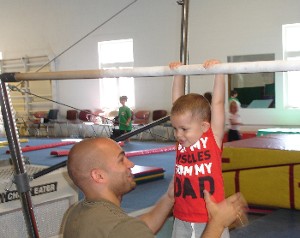 Pumping Little Johnny full of crap isn’t a sign of love. It’s a sign of ignorance and poor parenting. Many parents in today’s world need to wake up and get a clue.