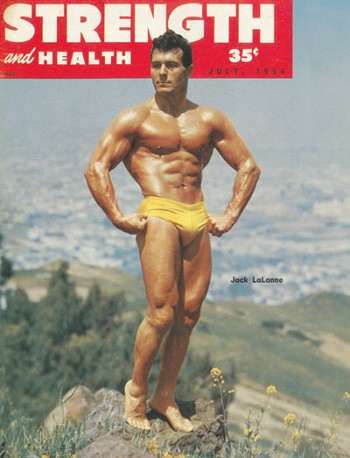 Below are two video clips from the legendary Jack Lalanne. Within each, Jack shares several tips for those interested in gaining weight. Don’t expect a detailed discussion of molecular science, but do expect several easy to follow suggestions.

One of the reasons that I enjoy Lalanne’s old clips is his ability to simplify those topics that others try so hard to complicate. Why must others make exercise out to be so complex? As E.F. Schumacker once said,

“Any intelligent fool can make things bigger, more complex, and more violent. It takes a touch of genius – and a lot of courage – to move in the opposite direction.”

Unfortunately, many in this industry would rather leave your head spinning. They strive to create confusion in topics that a 5th grader could easily comprehend. They’ll throw together a few basic movements and then create a fancy name that “defines” the workout, as if a fancy name somehow adds another level of sophistication. After all, if you are confused, you’ll become dependent on the guru and his advice. If you become self sufficient, you offer nothing in return. How can the guru purchase a new sports car if you don’t need him to hold your hand at the gym?

I’ve read articles where it seems like the author is competing in a 4+ syllable word contest. How many 4 or more syllable words can he include within a 1000 word article?

And please do not confuse the meaning behind this entry. I have nothing against 4 syllable words. I am not being fastidious with my repugnance for provocative word selection, if such verbiage is both appropriate and conscientious. Yet, the superfluity of words must not intentionally stray from elementary concepts such as simplicity. Such intentional and incorrigible overuse of 4 syllable words would be deemed inappropriate, irrepressible, and perhaps indecipherable, even to those with unsurpassed intelligence acquired at the most magnificent universities.

Now, moving on from my moment of sarcasm, let’s get back to the subject of simplicity. Look at the Jack’s picture above from 1954. Jack was in top shape long before most of us were born. He achieved his strength long before the latest and greatest breakthroughs were revealed online. Many of my former coaches were also in top shape long before the Internet. And please don’t take this as a knock against education or science. My wife is a teacher and I’m a science junkie. I’m not against learning. I just happen to be in support of Schumacker’s advice (listed above).

The Internet has changed the fitness industry. Never before has getting in shape been made out to be so complex. I’m only in my 30s, but even we didn’t have the Internet when I was in high school. I didn’t learn of the Internet until my freshman year in college. Back in the day, no one assumed that a degree in rocket science was required to build strength in the gym. I know groups of guys who may have had one brain between the entire group, yet were monsters in the gym. Not many athletes and gym rats were in contention for valedictorian. I’d be willing to bet that our high school valedictorian didn’t know the difference between a pull-up and a chin-up. Fitness wasn’t his gig.  Exercise wasn’t thought of as one of the lucrative fields to pursue. There were still loads of strong and amazing athletes however. The difference was that no one was trying to confuse them with irrelevant bullsh*t. Athletes went to the gym and busted their ass. The results followed. That’s it. Nothing fancy.

Oddly enough, many of our old gym class workouts are now thought to be revolutionary. I just wish my old gym teacher knew the goldmine that he was sitting on as we ran suicides on the basketball court. He could have retired early…

Now that I’ve rambled on longer than expected, let me close with an old saying. Those involved in this industry need to start applying this simple advice.

Unfortunately, many in this industry want everything but for you to learn how to exist on your own. Don’t let them confuse you. Keep it simple, bust your ass, mix things up, and have some fun. Simple often equals superior.

PS – For a related article, refer to The Endless Search