A few years ago, I read an article about children imitating their parents. Although I couldn’t locate the exact article, the link below will drive home the important points:

When I first read about this topic, it didn’t have much of an impact on my life. I wasn’t a parent, so wasn’t about to read up on my parenting skills. Now that I am a parent however, things have changed.

I can now testify firsthand to the accuracy of the old article. My son Troy imitates my actions. He follows me around the house. He loves to come into the gym and imitate our actions. If he sees something, he wants to try it himself. 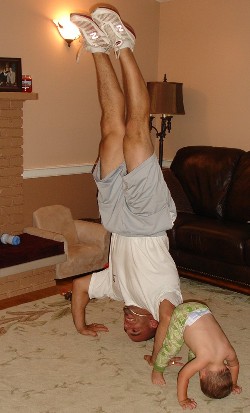 The Modern Forager site recently linked to the following article:

Too Much TV Linked To Behavioral Problems

To summarize the article:

“Researchers found that children who watched more than two hours of television per day from age 2 1/2 until age 5 1/2 were more likely to develop sleep, attention, and aggressive behavior problems than those who watched less.

In addition, researchers found 5 1/2-year-olds who watched more than two hours of television per day also had fewer social skills.”

Throughout this blog, I’ve often addressed the topic of childhood obesity. To correct this problem, we as parents need to correct our actions, so our children can begin to imitate true role models. We need to become role models to our children.

What kind of example are you setting if you sit around all day and abuse your body? How can you expect your child to do differently?

As a parent, I cherish the time with my child. We don’t sit around and watch television. My son loves to go outside and run in the yard. He loves to throw the ball. He loves to play, and he’s only 16 months old.

I’m guessing that we all started off this way, but somehow many kids end up going down the wrong path. They get lost playing video games, watching television, and playing on the computer.

What happened to kids going outside to play? That’s all we did as kids, but I don’t see the same interest in many kids today. We as parents need to change this pattern.

I’m still a big kid at heart, and cherish the time that I can play with my son.

Lead from the front, and your child will be a proud follower!